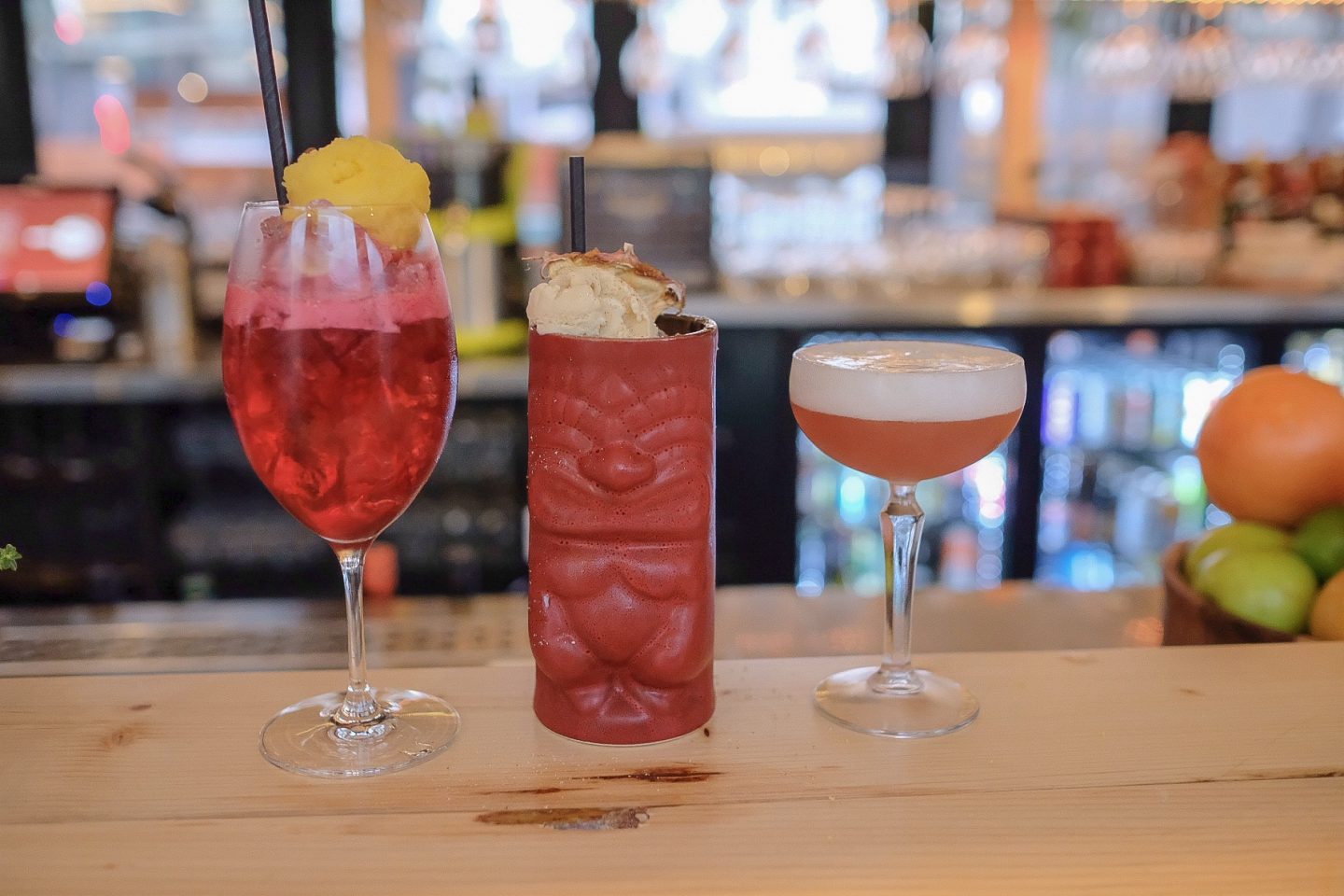 I recently visited the newly opened restaurant Ficus on the upper level of Yagan Square and was highly impressed. With gorgeous views overlooking the CBD, Ficus incorporates a beautiful natural environment filled with plants, alongside the lively nightlife of Perth city. With a paddock to plate inspired menu, the dishes are sourced from local produce that caters for all palettes and dietary requirements. Seasonal ingredients are added to the menu for fresh and flavoursome meals headed by one of Perth’s finest chefs, André Mahé whom I had the pleasure of meeting from behind the scenes in the kitchen. 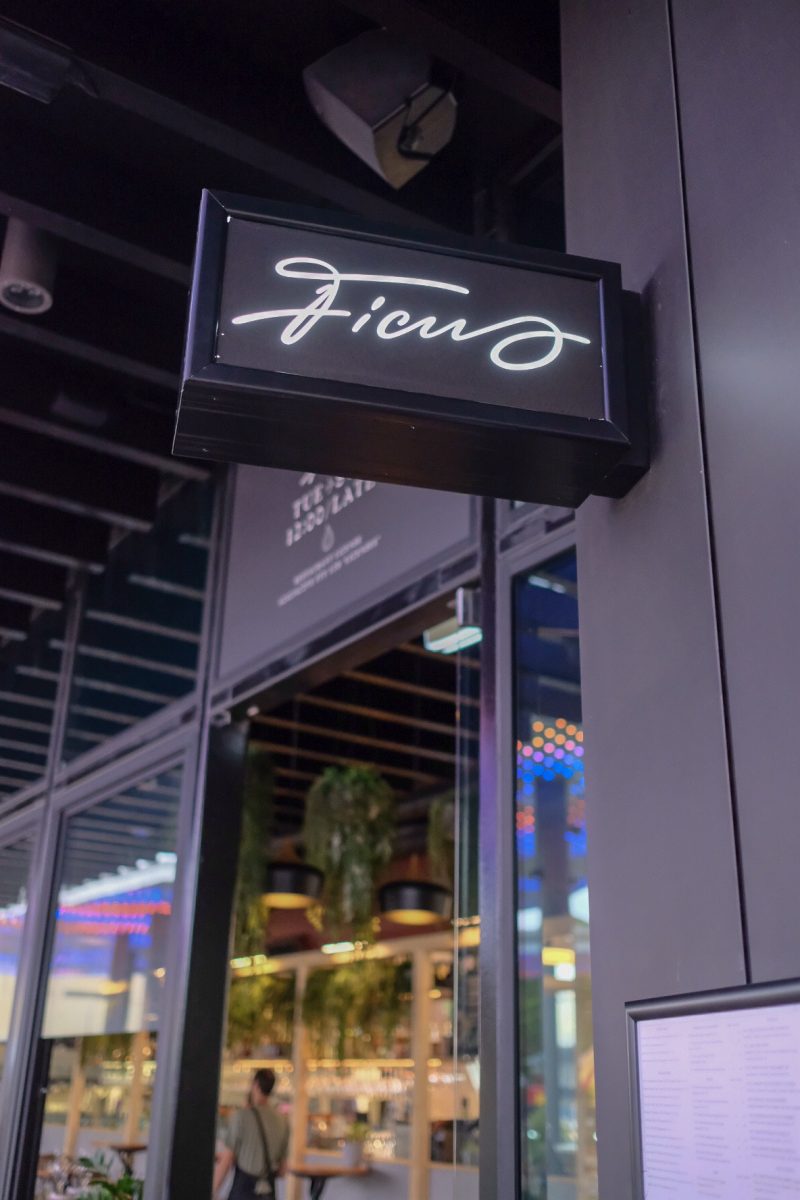 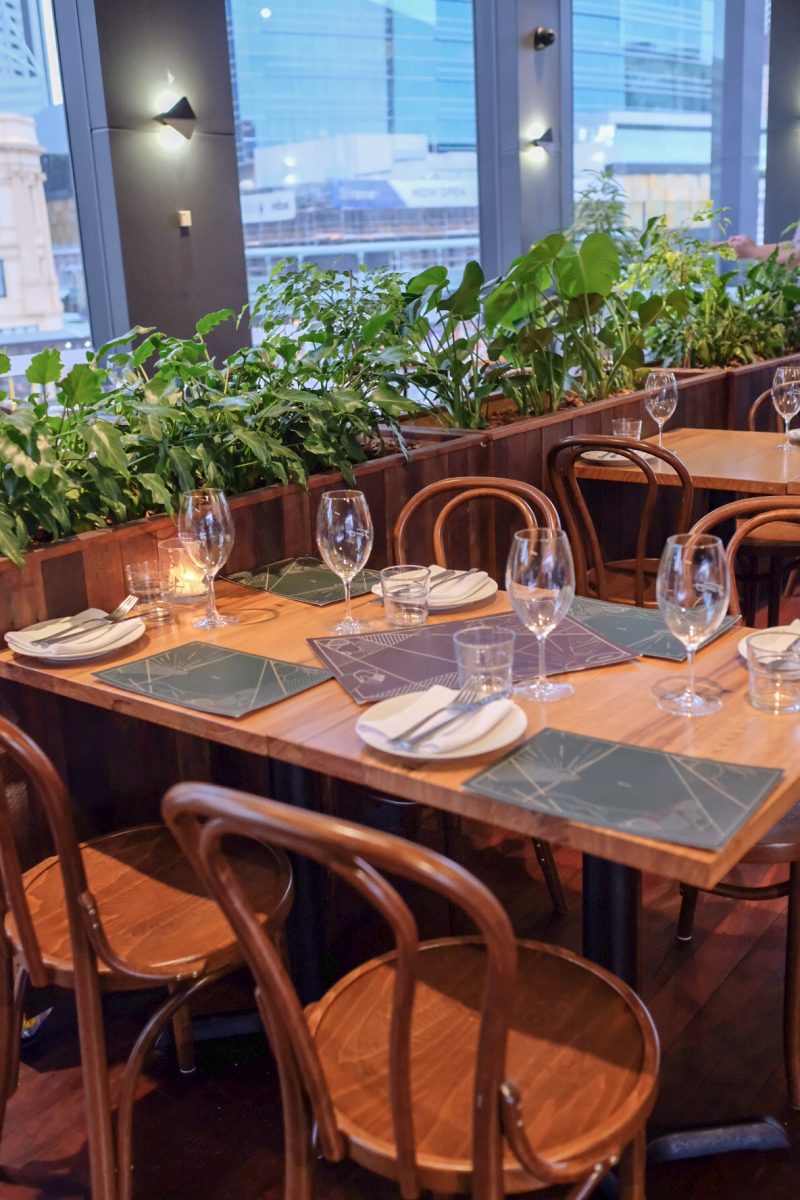 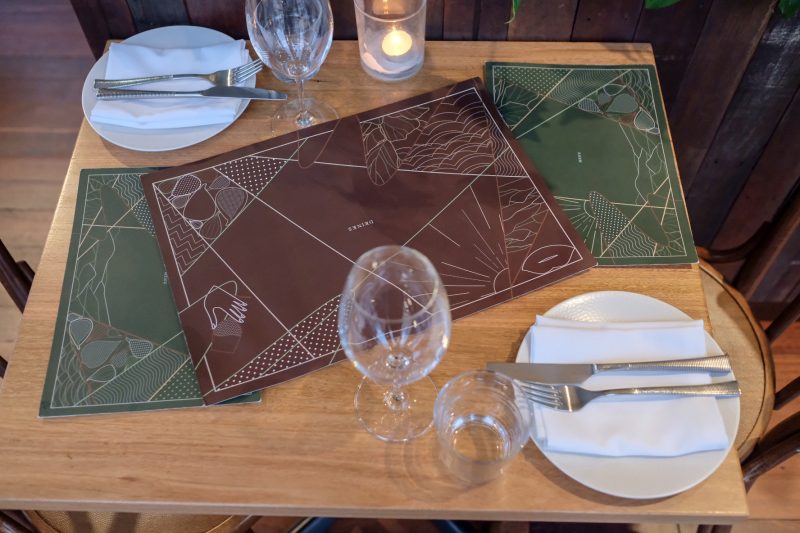 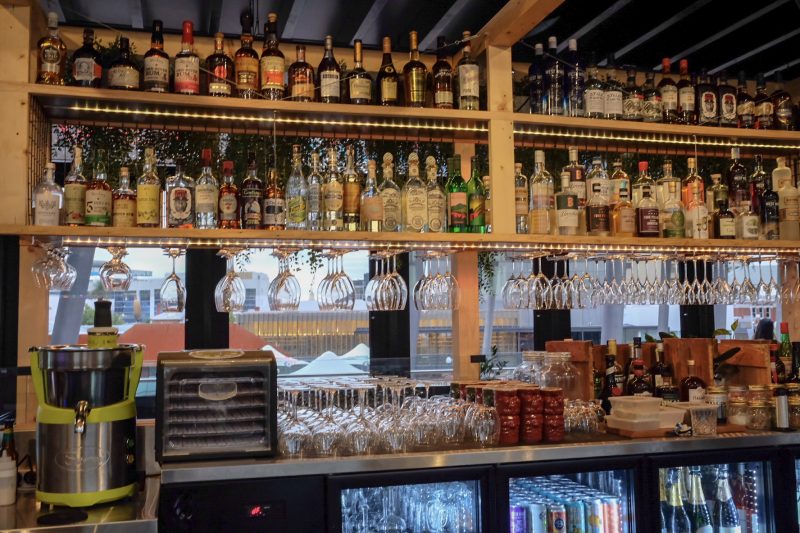 We started our dining experience with some cocktails of course. Ficus’ cocktails go down the list via numeric order so its easy and simple to order a drink without trying to pronounce a long and exotic name. Along with their ingredients at Ficus, most of their liquors, particularly their gin are all locally sourced within Australia, given the exception of one New Zealand gin. The most impressive part about Ficus’ drinks is their use of native shrubs for garnishes. Ranging from saltbush to karkalla, the native garnishes give the drink that extra pop of colour and taste. I began with No.2, a rosey subtle sour cocktail consisting of 666 vodka, strawberry gum, vanilla, rosé, blackberry, citrus and lemon leaf foam. The foams and ice creams that garnish the cocktails are all made in store, so you can expect them to be packed with flavour. The No. 4 however was my favourite drink of all. Served in a tiki glass, this rum cocktail tastes like a boozy banana milkshake. A very summery option, this drink reminded me of lying on a deck chair in the tropics of Hamilton island. The No.1 was also a favourite of mine I would order again, that is perfect for a light refresher just before a meal. Consisting of prosecco, Summer Blossom soda, mandarin sorbet and a karkalla leaf, this drink is the embodiment of a refreshing post-work drink for the summer. 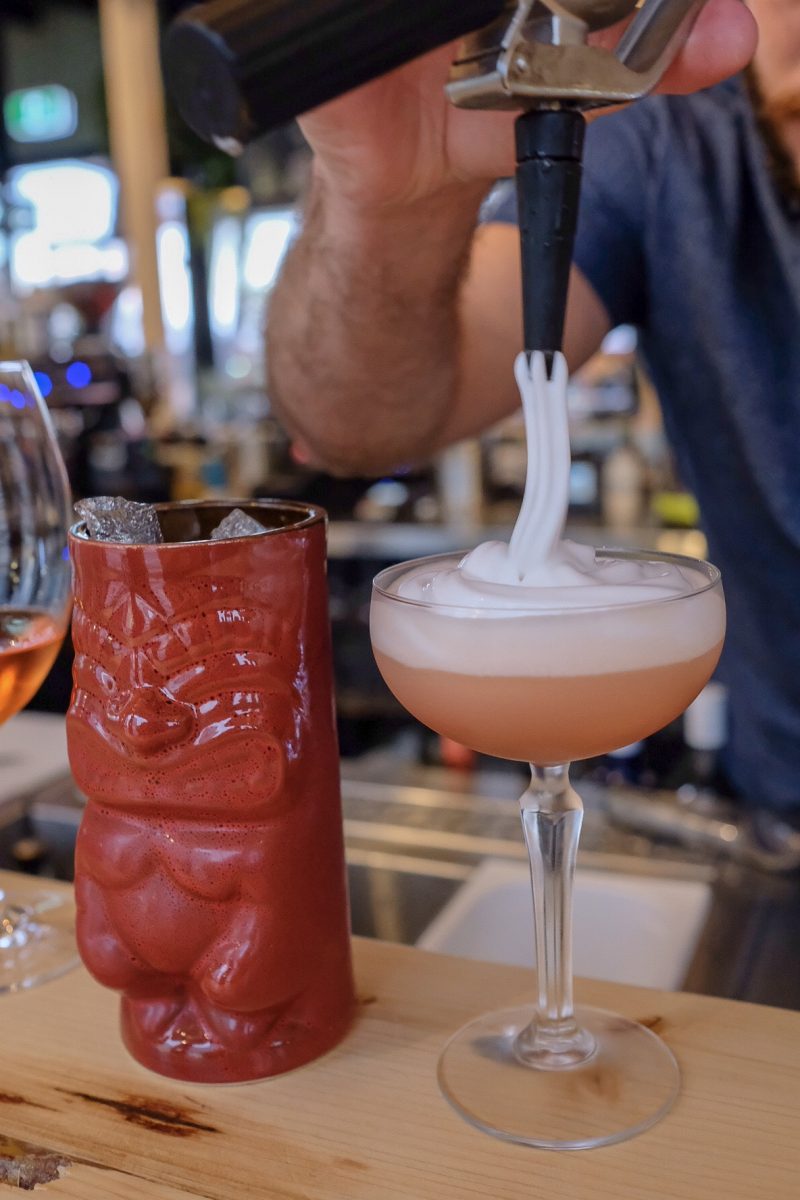 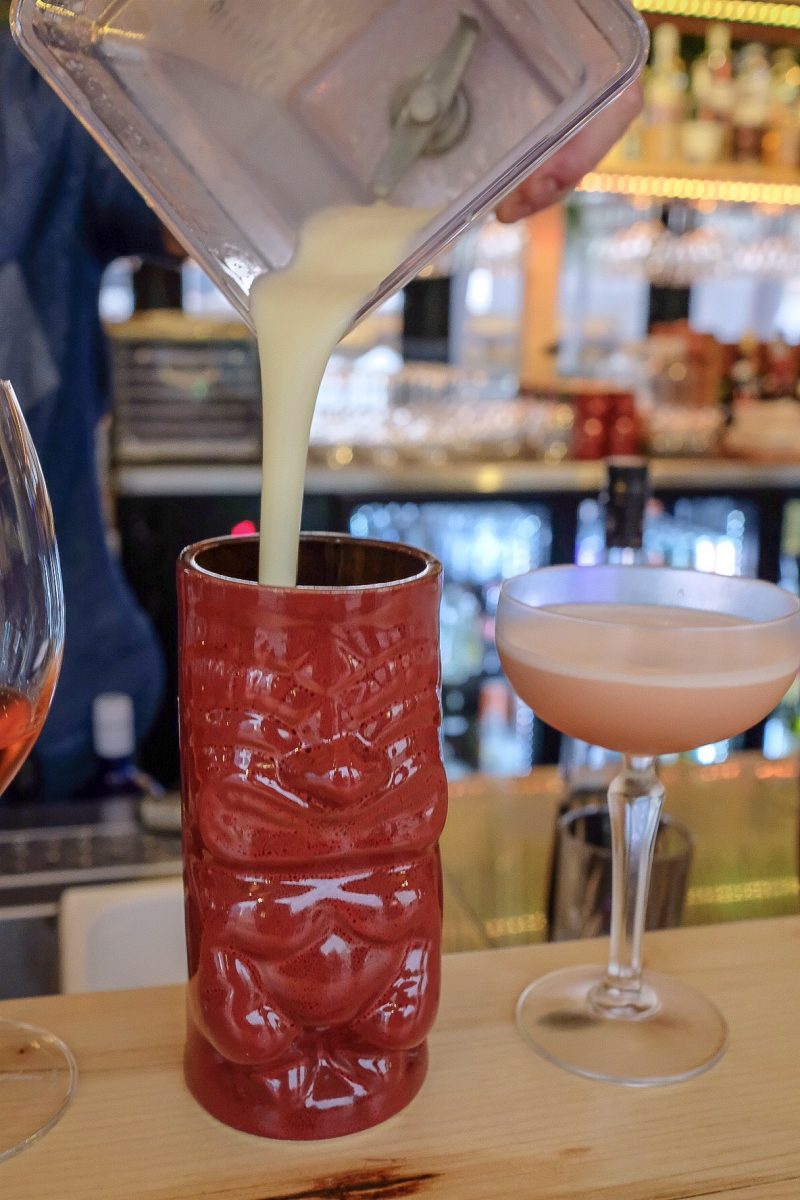 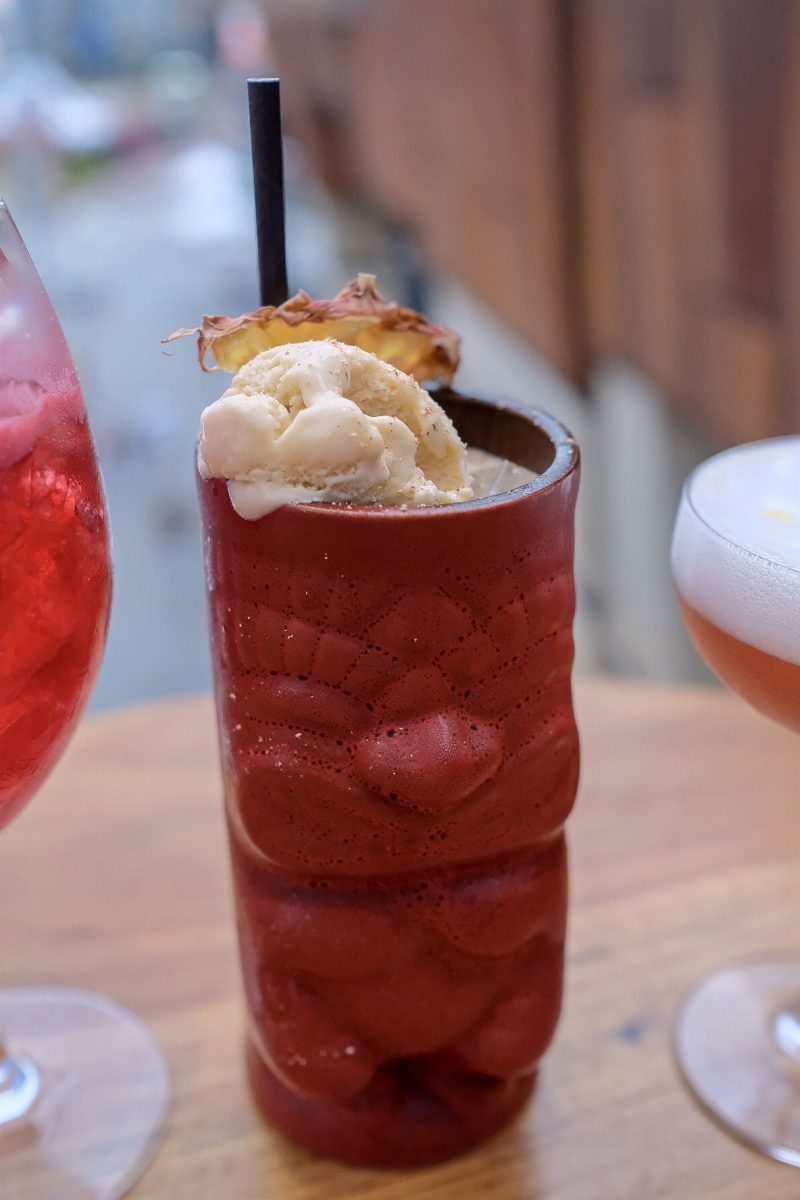 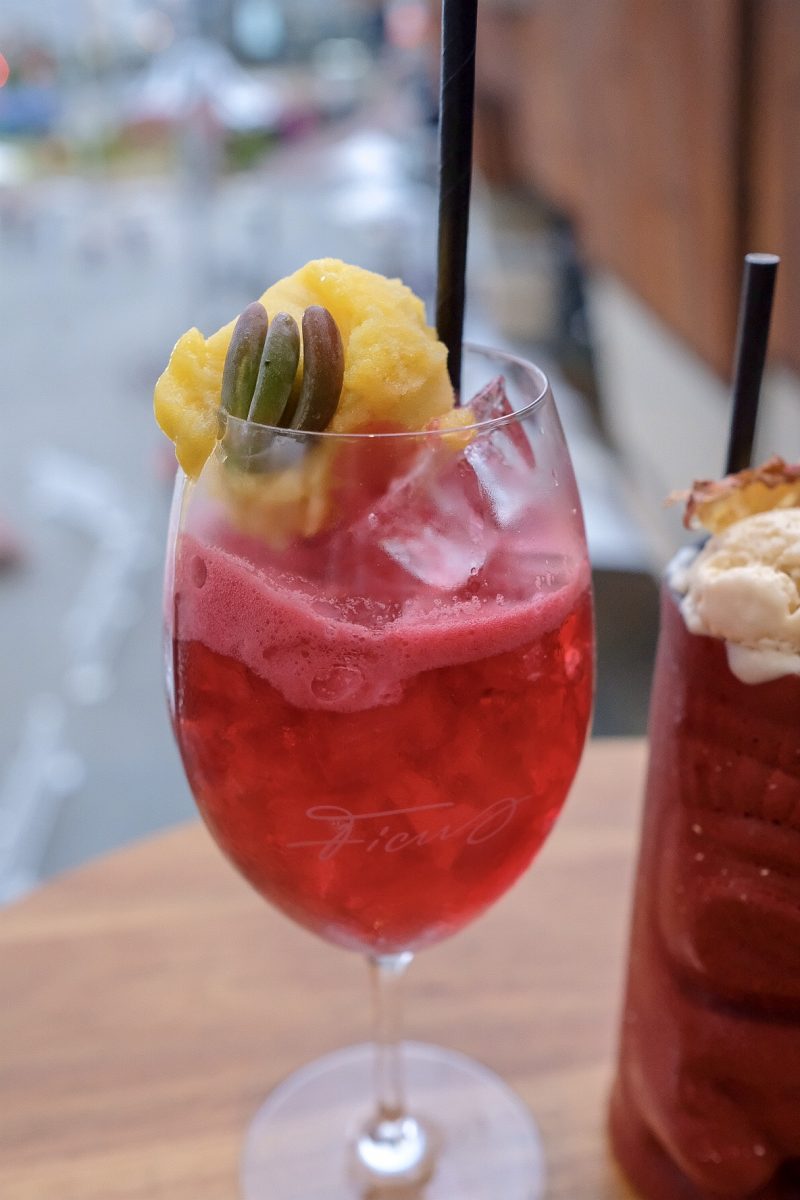 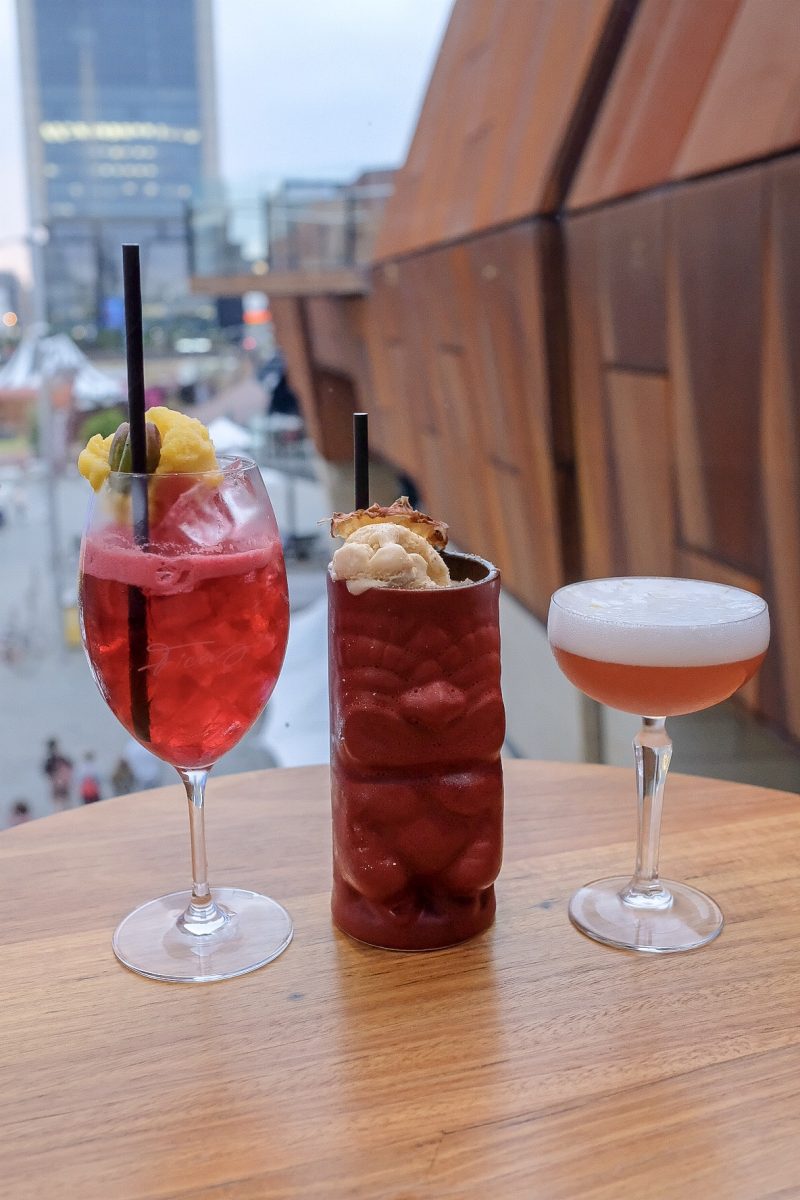 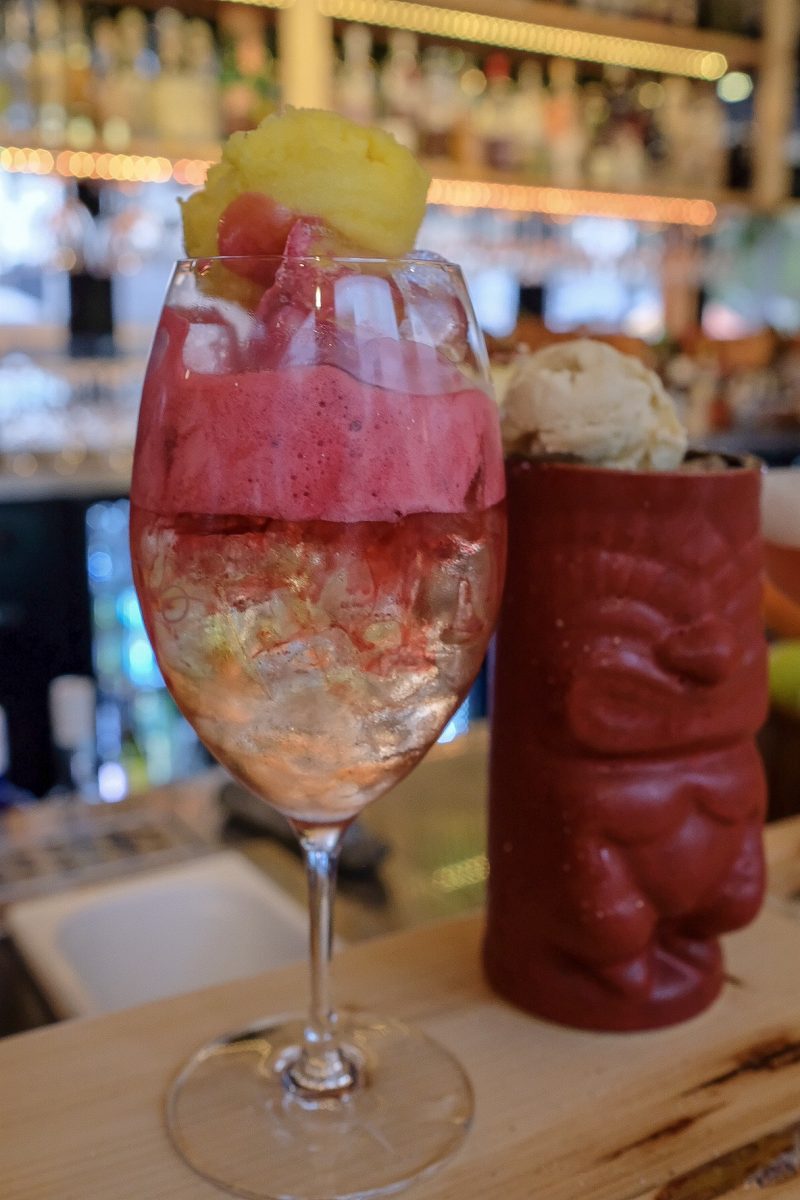 We delved straight into the menu for entree, beginning with Mahé’s famous Charcuterie plate (GF). Consisting of pork rillettes, pate en croute, pork hock terrine and pickled vegetables paired with crispy bread, it was my first Charcuterie plate. I have to admit, I’m not the biggest fan of cold cooked meats or pâtés, but this was surpassingly tasty, especially the pork rillette which was the shining star of the plate. Next, we thought we would go for some light entrees since we planned on tasting Ficus’ renowned steaks for mains. The heirloom beetroots (V, GF), citrus cured huon valley salmon (GF) and slow-cooked linley valley pork belly (GF) was our entrees of choice. I was oh so happy with our choices, the beetroots were so tasty and paired exceptionally with goats curd and candied walnuts. The pork belly was probably my highlight of the entire night. The skin on top was crackled to perfection and the pork was perfectly cooked to the point where it would string off from your fork and melt in your mouth. Paired with seared local scallops and an apple salad, this dish had so many perfectly balanced elements. The citrus cured salmon was also exceptional, paired with pressed watermelon, wasabi pea and kohlrabi. All 3 entrees were light, well balanced and a perfect start to a night of eating. 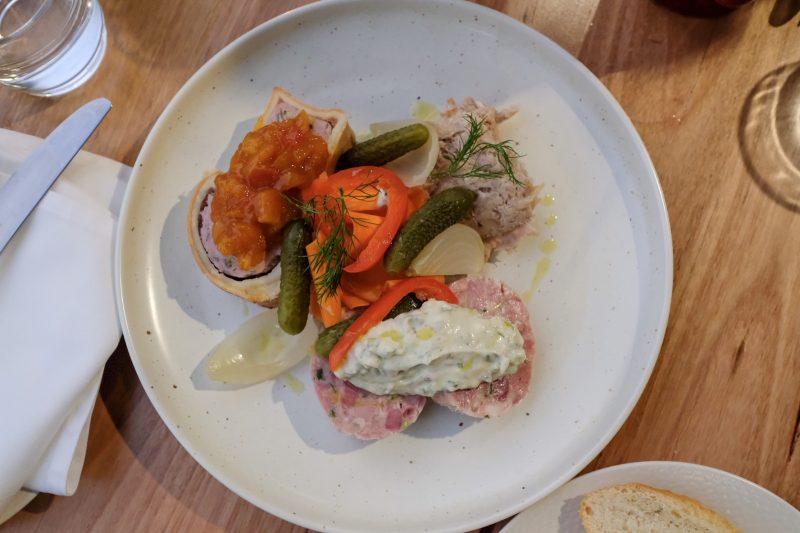 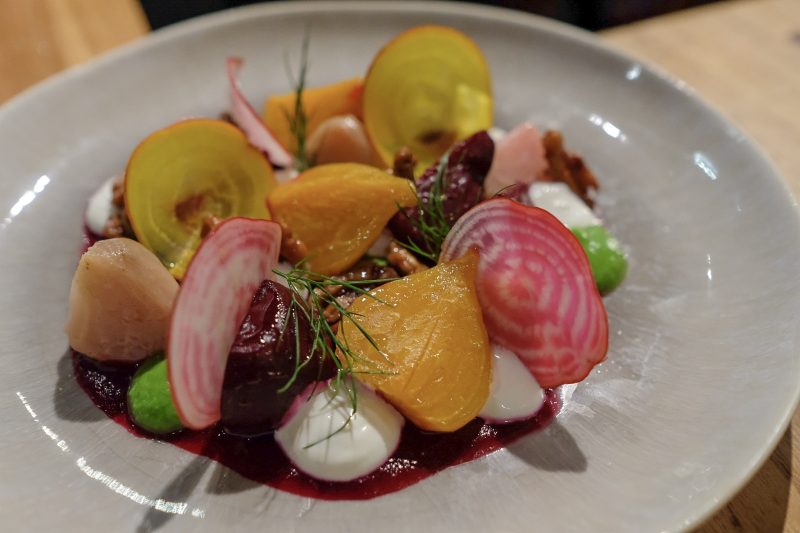 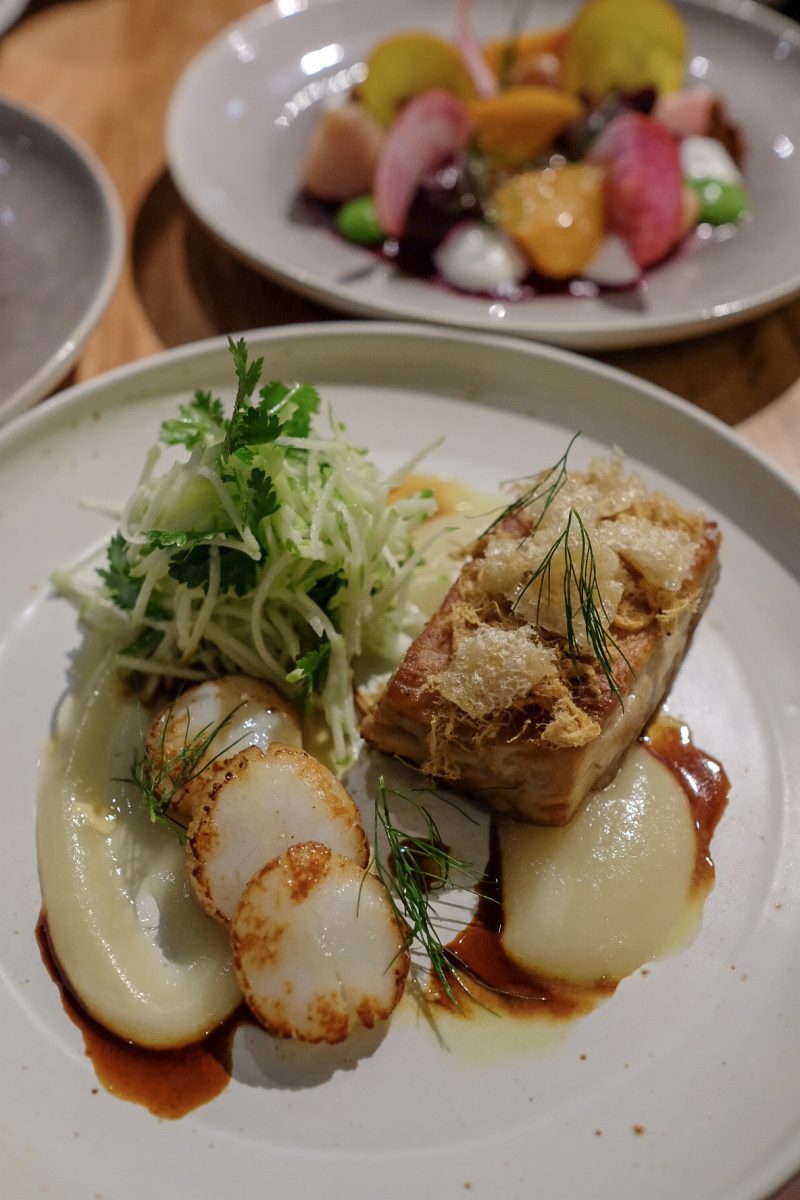 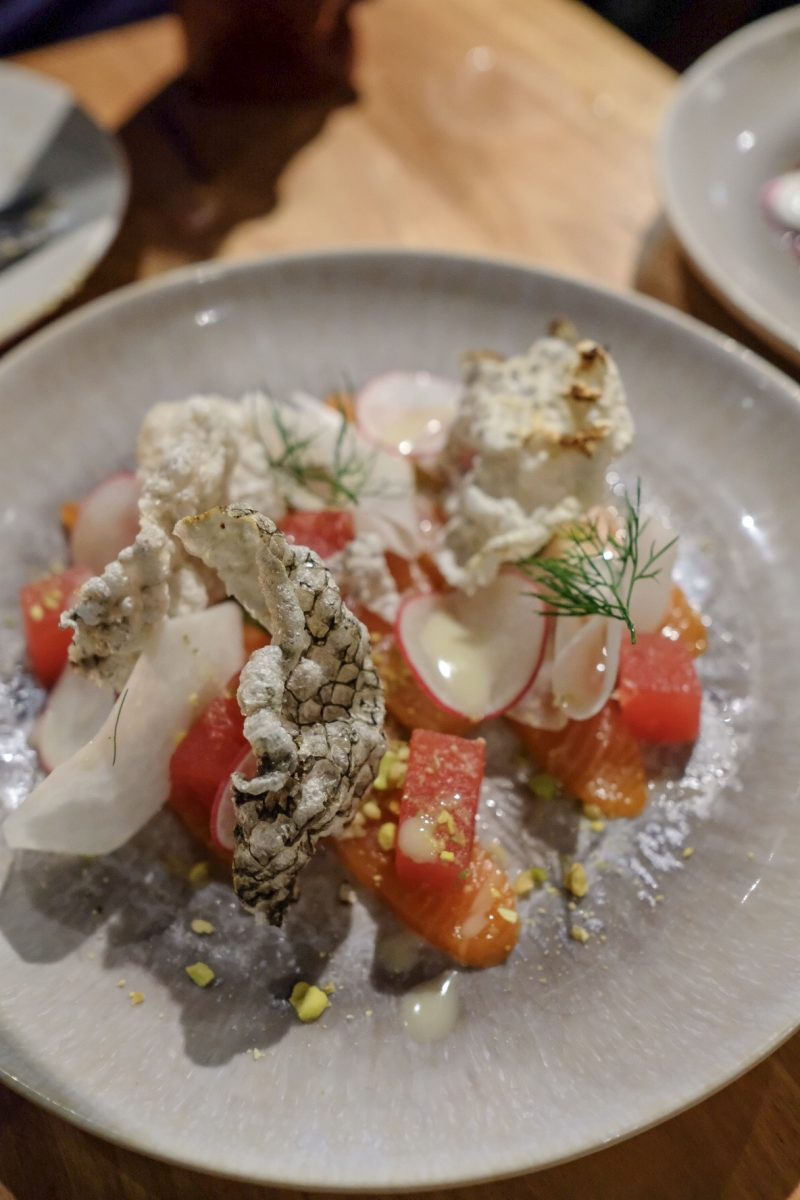 A break was in order after entrees as we had to prepare our stomachs for what was to come. More cocktails were the solution. I was intrigued by No. 3 which a macadamia, lemon and saltbush gin delight, but the bartender steered me in the right direction stating that it was the kind of drink you have before a meal as a light refresher. Another great feature about Ficus is the friendly and approachable staff who are always there to help you if you are unsure of anything on the menu or need advice on what to pair your food with. I was curious about the No.6 which combined all elements of sweet, strong and bitter. Starboard two-folk whisky, salted caramel, spiced mead and bitters was the foundations of this drink. Served short with a giant ice cube, the drink comes out smoked after being set alight. A drink definitely not for the faint hearted, the initial sips were quite sweet as you can taste the salted caramel, but the aftertaste was quite strong of whiskey. The No. 8 was our other drink of choice consisting of Los Siete Misterios Mescal, amaro, Davidson plum, ginger, baking spice and bitters. Served long with crushed ice and a cinnamon stick, this marmalade coloured drink was quite bitter and strong. If you’re a lover of spice and ginger I would recommend this drink, however if you’re not, its probably not your cup of tea. 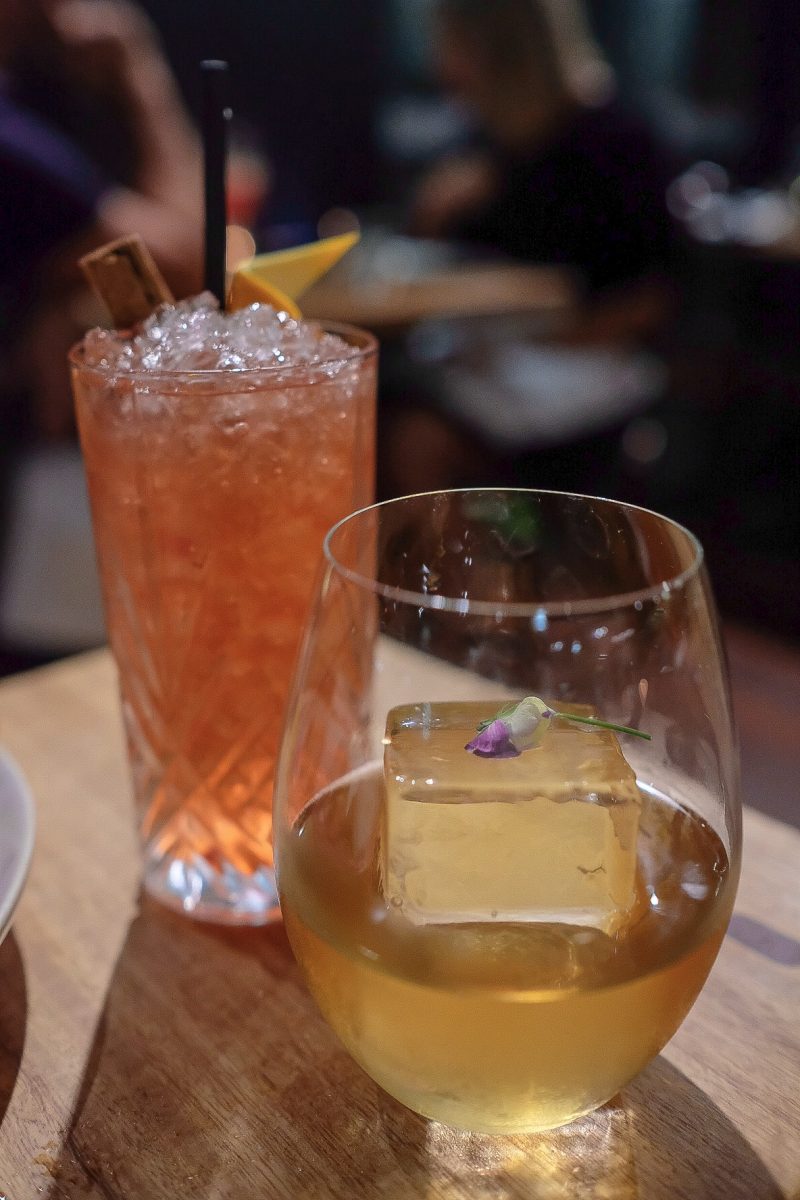 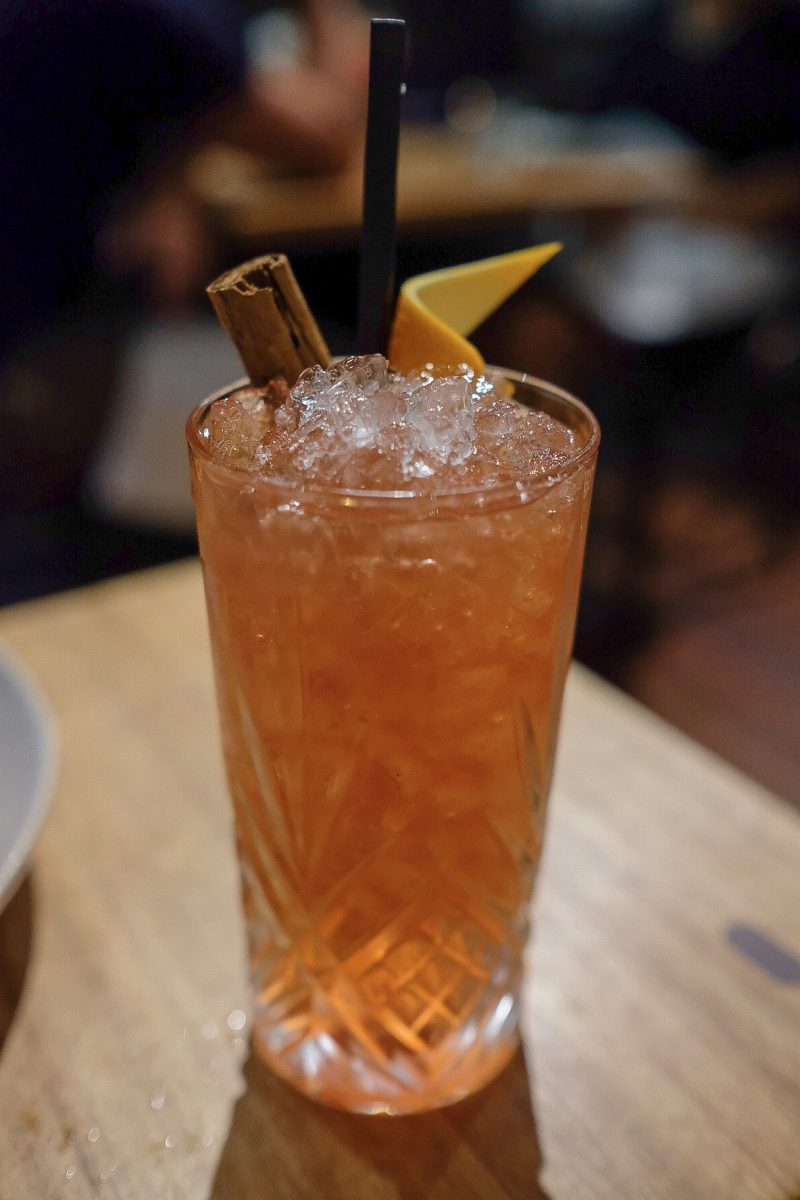 We were lucky enough to have a sneak peak inside the kitchen where the magic happens as Mahé was cooking up one of their Tomahawk 850g ribeye’s. It was truly amazing watching this beast of a steak set in flames on the grill and sliced up by the man himself. As we were quite full by this point we thought we would go for something a tad smaller in size and decided on the Carrara wagyu rib eye 350g. Cooked to medium rare, this steak was faultless. Every bite was packed with flavour as it melted in your mouth. Two other mains we got to taste was the black olive ravioli (V) and the duck leg confit (GF). I am not a fan of black olives whatsoever, however this ravioli was so exceptional that next time I dine here, I would probably order this as my main meal. You know you have an exceptional dish if it consists of a type of food you don’t like, yet its that tasty, you’d order it again. Paired with a red pepper coulis and shaved parmesan, this meal was delightful. The duck leg confit was also outstanding, paired with a chorizo bean cassoulet, pommes anna and jus. The bed of layered potatoes paired perfectly with the moist and melting duck. 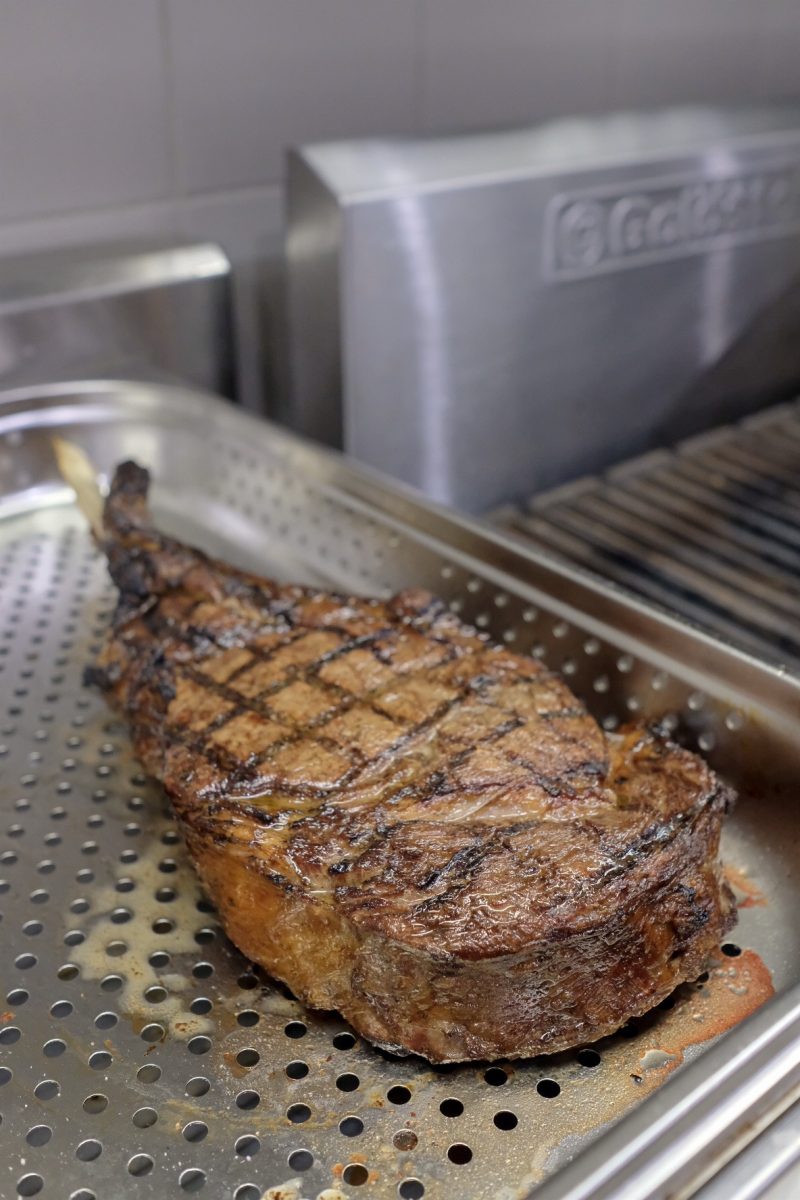 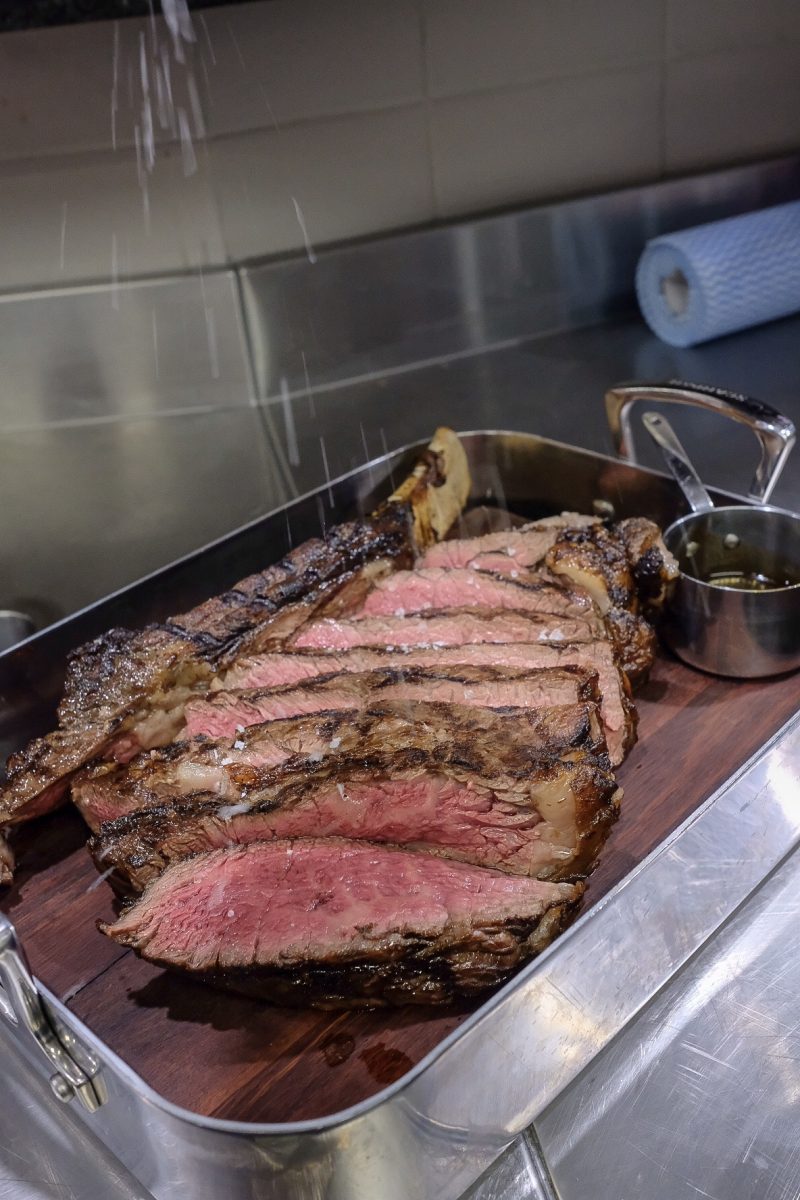 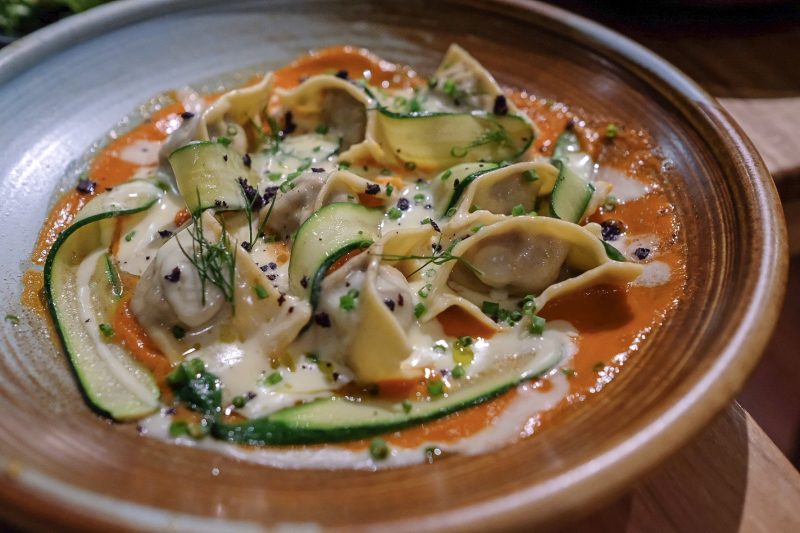 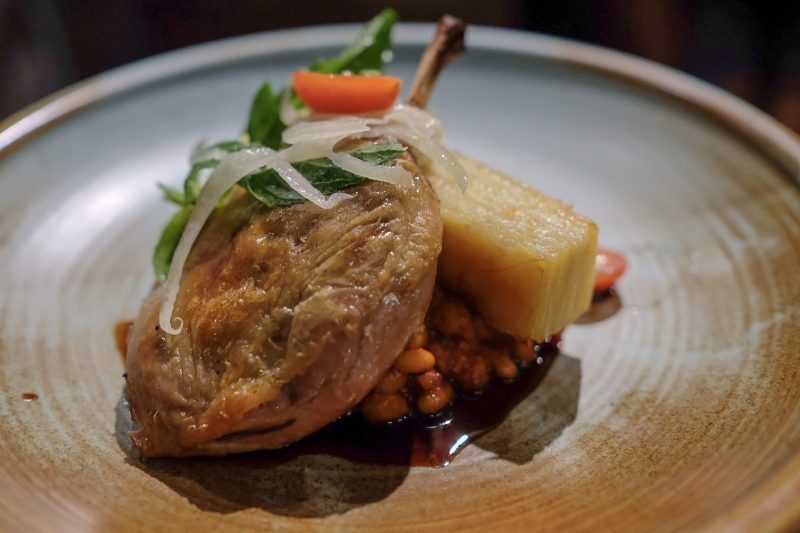 To end the night, dessert was in order. After eating a lot of protein, we thought a light refreshing dessert would be fitting. The Ruby lime panna cotta (GF) with seasonal fruits and mandarin sorbet was the perfect dessert after a protein heavy meal. The meringue was also notable with a mascarpone cream, strawberry coulis and homemade vanilla ice-cream (GF). As a lover of dessert wines, I asked the waiter what they had on the menu. Offering me a white port, I was intrigued to see what it would taste like. Pairing the port with soda water and lemon, I would have never thought to put these together, but the bartender insisted I tried, and thank goodness I listened. 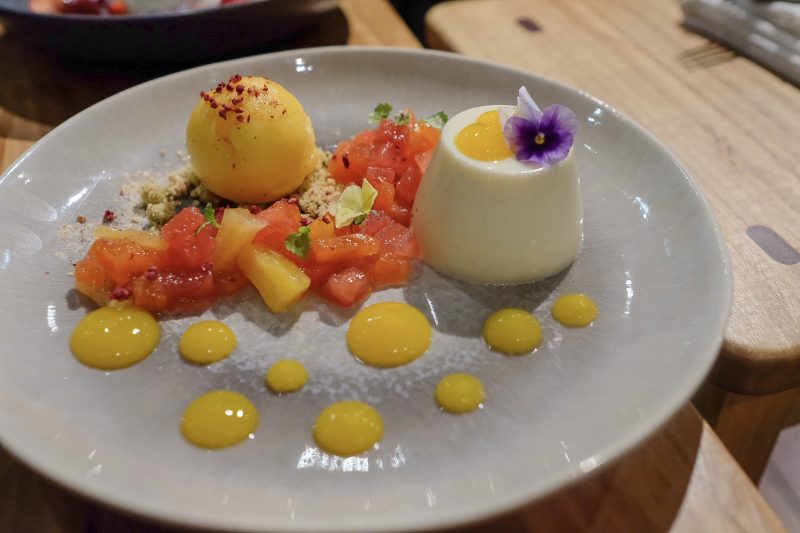 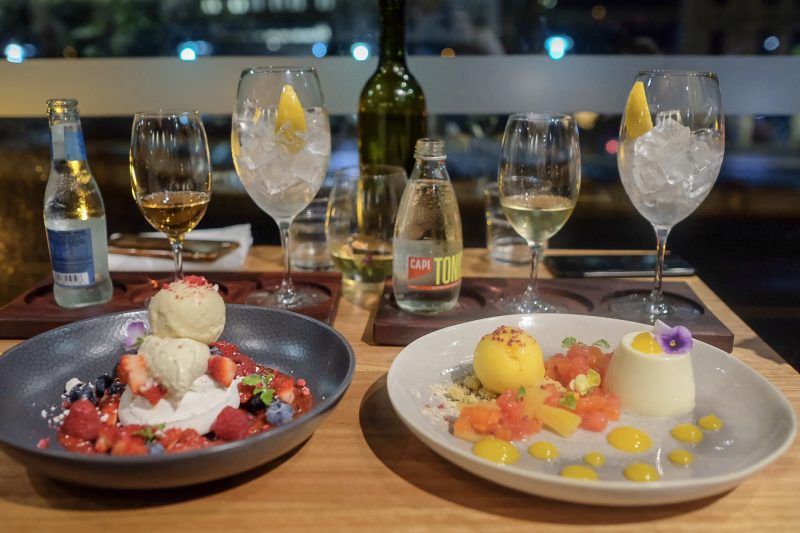 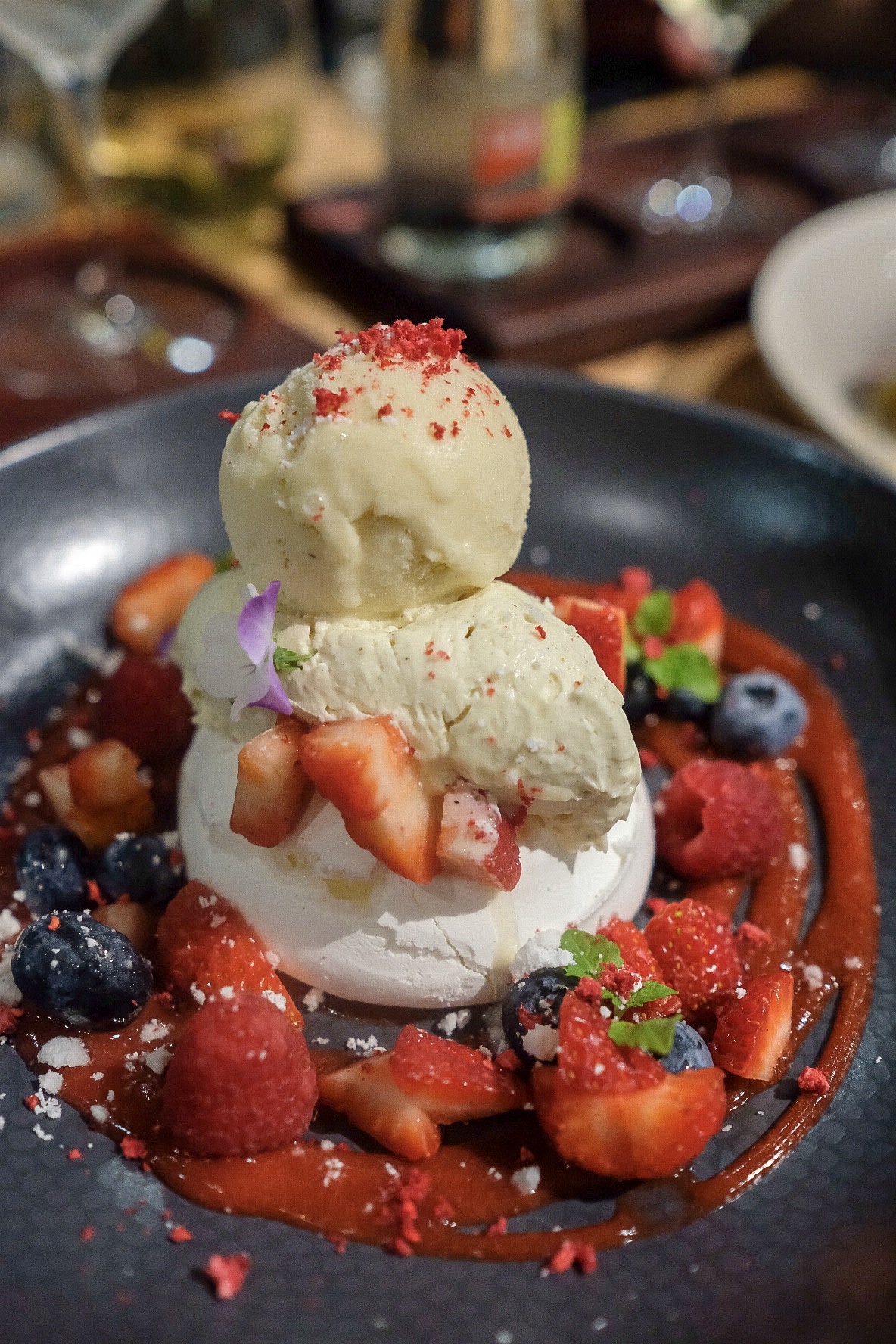 Overall, I was utterly impressed by the food and service Ficus has to offer. Overlooking the CBD, it is the perfect location whether it be for drinks, nibbles or dining. 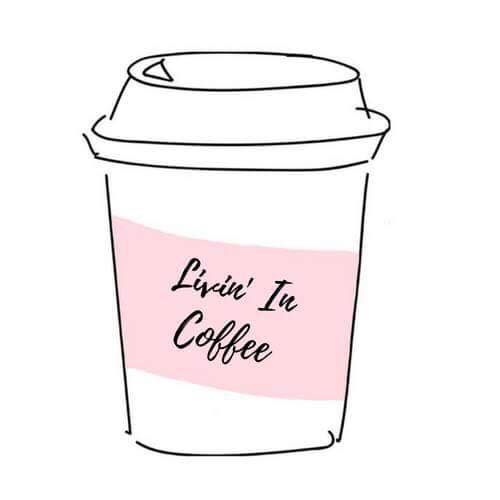